To share your memory on the wall of Tommy Wright, sign in using one of the following options:

Born January 12, 1923 at Pine Bluff, he was a son of the late Henry Talbot “H. T.” Wright and Dena Idelle Adams Wright. He attended Sulphur Springs and Watson Chapel Schools, graduating in 1942.

Mr. Wright proudly served in the United States Army during World War II in Germany, France, and was in the Battle of the Bulge.

An employee of the Cotton Belt Railroad for 43 years, he retired as a carman in 1984. He was also a member of the Union Lodge of Railway Carmen.

He was a faithful and longtime member of Salem Missionary Baptist Church at Pine Bluff, and was usually the first person at the church on Sunday mornings to open the building. After he moved to Northwest Arkansas, he became a member of Cross Church in Springdale.

Mr. Wright was also predeceased on April 22, 2009 by his wife, Ida Lawrence Wright, whom he married on August 16, 1942; a grandson, Preston A. Harris; and his siblings, Annice Keys and Johnnie Wright.

The family wishes to thank all Doctors and Nurses in the Palliative Care Unit at the Fayetteville VA Hospice.

To send flowers to the family or plant a tree in memory of Tommy Wright, please visit our Heartfelt Sympathies Store.

Receive notifications about information and event scheduling for Tommy

We encourage you to share your most beloved memories of Tommy here, so that the family and other loved ones can always see it. You can upload cherished photographs, or share your favorite stories, and can even comment on those shared by others.

Posted May 16, 2021 at 09:04am
Keeping you in my prayers. Mr and Mrs Wright were my neighbors for 17 years. From late seventies to early nineties. Mr Wright was sweet loving man. I know he will be dearly missed. The Carter family.
Comment Share
Share via:
C

Posted May 14, 2021 at 10:51pm
My relation to Bro Tommy as his minister while he was active at Cross Church he was a very faithful follower of Jesus. Tommy was proud to have served his country during WWII. I recall him wearing his WWII cap to let everyone know he served with pride. He was always in Bible Study in our small group and he was always present when we had Bible Study at Providence Assisted Living in Springdale. He ran a good race and now in the presents of our Lord.
We will see you later.
Charlie Foster Minister of Pastoral Care, Cross Church Springdale, AR
Comment Share
Share via:
S

So sorry about uncle Tommy. Just found out today. Talbot and I luved him and aunt Ida dearly. My prayers will be with your family. 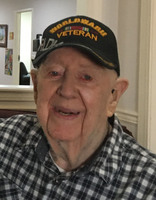