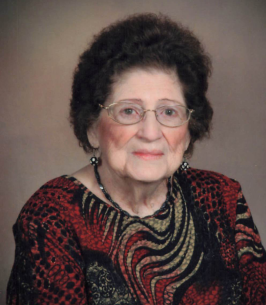 Born at Woodlawn (Cleveland County), she was the daughter of the late John Henry Henderson and Cloma Camille Dixon Cope. She was a member of Friendship Missionary Baptist Church.

Ruthie Lee was a floral designer for over 50 years, and had worked at Shepherd Florist, The Petal Shoppe, and Lawson’s Flowers and Gifts.

One of her great passions was making music. She played the guitar, but mostly upright and electric bass over many years. Her bands played on radio stations, at numerous county fairs and rodeos, and on the “Homefolks Party ” television program which was broadcast over KATV.  Ruthie Lee especially enjoyed playing at the Highway 63 volunteer fire station as a fundraiser for improving the firehouse and its furnishings.

She married William “Bill” Breech on September 23, 1944, and he preceded her in death on March 29, 2014. Also predeceasing her are siblings, Bob Henderson, Boyce Cope, Ann Locke, and Kenneth Cope; and her step-father who helped raise her, Claude Cope.

Visitation will be Thursday, January 13, 2022, beginning at 1:00 p.m. at Friendship Missionary Baptist Church in Woodlawn. The funeral service will follow at 2:00 p.m. with Brother Jackie Richardson officiating. Interment will follow in Roselawn Cemetery by Fuller Hale-South Funeral Services.