To share your memory on the wall of Rick Billingsley, sign in using one of the following options:

A lifelong resident of Pine Bluff, he was born March 21, 1958, and was the son of Charlene Young... Read More
Ricky Edward “Rick” Billingsley age 62, the Constable of Whiteville Township since 2005, departed this life on Monday, November 2, 2020.

A lifelong resident of Pine Bluff, he was born March 21, 1958, and was the son of Charlene Young Billingsley and the late James Edward Billingsley. Rick served in the United States Navy aboard the U.S.S. Saratoga for two years.

Throughout his adult life he had a varied career, from ambulance service, to selling cars, then to owning his own business. He worked for over ten years for Lusby Ambulance Service, where he became a “jack of all trades” and was known as the top expert on extraction in Arkansas. He then worked at Trotter Ford for over six years. He later owned and operated Rick’s Service Company for 25 years.

He was a longtime volunteer with the Highway 15 S. Volunteer Fire Department and was currently serving on the Board of Directors. Rick attended Watson Chapel Baptist Church.

Rick will be remembered as a loving husband, father, and grandfather who was crazy about his grandchildren. He was also generous with his time, volunteering in the youth baseball program at Seabrook YMCA. Rick was also helpful to community members and organizations, meeting needs that he saw with his equipment or just lending a helping hand.

Memorials may be made to Arkansas Children’s Hospital, 1 Children’s Way, Little Rock, AR 72202 or online at ARChildrens.org
Read Less

To send flowers to the family or plant a tree in memory of Rick Billingsley, please visit our Heartfelt Sympathies Store.

Receive notifications about information and event scheduling for Rick

We encourage you to share your most beloved memories of Rick here, so that the family and other loved ones can always see it. You can upload cherished photographs, or share your favorite stories, and can even comment on those shared by others.

Posted Nov 07, 2020 at 05:08pm
Angie, so sorry to learn of your loss . My thoughts and prayers are with you and the family.
May God Bless.
Barbara Turner(FNB of Altheimer)
Comment Share
Share via:
SS

Posted Nov 05, 2020 at 10:47pm
Very very sorry to hear of Rick's passing my deepest sympathy to Angie and his family prayers for the family
Comment Share
Share via:
DN

Posted Nov 05, 2020 at 08:54pm
We are so sorry to hear of Rick's passing. He was a good man, and would help anyone that needed help. God bless his family as they learn to live without him. He's waiting just a moment away for you.

Posted Nov 04, 2020 at 05:54pm
Our thoughts and prayers are with all of the family during this difficult time. We are so sorry for your sudden loss. Please accept our sincere sympathy.

Posted Nov 04, 2020 at 03:29pm
What a precious soul the good Lord called home. Rick was such nice guy with a contagious smile and a heart of gold.
He will be missed that everyone that knew him.
Comment Share
Share via: 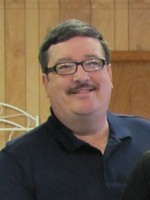