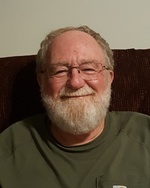 Richard Daniel Wingard, 66, of Pine Bluff, died Sunday, August 30, 2020, in a Little Rock hospital. He was born June 27, 1954, in Pine Bluff. He was an electrician and member of IBEW Local #295 for 45 years, and was a member of the non-denominational church. He loved hunting, fishing, and shooting.

He was preceded in death by his parents, William Gene and Atha Wingard; one daughter, Carol Wingard; a sister, Zelda Brantley; and an uncle who was like a big brother to him, Albert Barbaree.

He is survived by his wife of 43 years, Molly Wingard; one son, Michael Pote; one daughter, Dalena Peterman; two brothers, Michael Wingard and Charles Wingard; seven grandchildren; and a number of other relatives.

Graveside services will be held at 10:00 A.M. Friday, September 4, 2020, at Memorial Park Cemetery with the Rev. Dennis Owens officiating. Arrangements are under the care of Fuller Hale-South Funeral Services.