To share your memory on the wall of Richard Wingard, sign in using one of the following options:

He was preceded in death by his parents, William Gene and Atha Wingard; one daughter, Carol Wingard; a sister, Zelda Brantley; and an uncle who was like a big brother to him, Albert Barbaree.

He is survived by his wife of 43 years, Molly Wingard; one son, Michael Pote; one daughter, Dalena Peterman; two brothers, Michael Wingard and Charles Wingard; seven grandchildren; and a number of other relatives.

Graveside services will be held at 10:00 A.M. Friday, September 4, 2020, at Memorial Park Cemetery with the Rev. Dennis Owens officiating. Arrangements are under the care of Fuller Hale-South Funeral Services.
Read Less

To send flowers to the family or plant a tree in memory of Richard Daniel Wingard, please visit our Heartfelt Sympathies Store.

Receive notifications about information and event scheduling for Richard

We encourage you to share your most beloved memories of Richard here, so that the family and other loved ones can always see it. You can upload cherished photographs, or share your favorite stories, and can even comment on those shared by others.

Posted Sep 04, 2020 at 02:09am
- [ ] Molly and Wingard family- my heart and prayers are with all if you - Remembering decades ago really getting to know both of you on a winter evening being offered a bowl of chili made with deer meat from One Richard had killed a deer camp - warm and good - Richard shared his faith and the Good News of Salvation!!! - Over the years of practicing his working skills at Russellville and on to Johnson Island and on and on always sharing his faith and encouragement and knowledge of guns and hunting to others. Thank you Richard and may you rest in peace.

Posted Sep 03, 2020 at 08:10pm
I had the opportunity to lay hands on Richard and pray for him at length at ORU. He often entertained me with his love for guns. While I know all will miss him, I cannot help but be full of shalom that he is with the Great King of the Universe. The Wingard family is in the prayers of the Jewish family. May his memory be a blessing as he is remembered. - Rabbi PJ Sorensen and the Signs and Wonders Ministries Team.
Comment Share
Share via:
GH 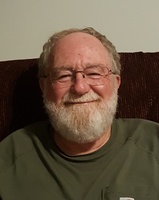