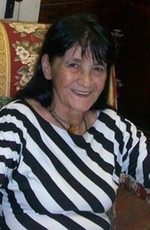 Peggy was born April 10, 1948, in Loreauville, Louisiana, to the late Ophe and Cecile Frederick Viator. She was reared and received her education in Loreauville.

She was a homemaker and a Baptist. Peggy was a loving, giving, and caring person who loved her family and enjoyed spending time with them.

She was preceded in death by her parents; daughter, Annette Mayeaux; sisters, Elaine Dugas, Lou Ella Louviere, and Gayle Bergeron.

Funeral will be 2:00 PM Monday, December 16, 2019, in the Chapel of Fuller Hale-South Funeral Home with Pastor John Staton officiating.