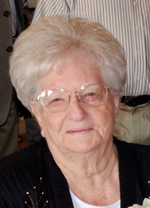 Pearl M. Flanagan Jones Brown, 94, of White Hall, passed away peacefully at home Tuesday, January 7, 2020. She was born August 7, 1925 at DePew, Oklahoma to the late Everett Earl and Beulah Clark Flanagan.
Pearl was reared in DePew, Oklahoma, until her family moved to California when she was 12. She remained there until she moved to Arkansas after she was married and farmed at Noble Lake with her husband Jack. She later worked as an LPN for Dr. O.C. Rainey and was a member of the Women’s Auxiliary for the VFW. She was a lifelong member of East Side Christian Church.
Pearl was preceded in death by her parents; her husbands, Jack W. Jones and A.E. “Pete” Brown; two infant sons; one daughter, Laverta Shults; three brothers; and three sisters.
Survivors include two sons, Jack (Gale) Jones Sr. and Ben (Sue) Jones; one daughter, Charleen (Wendell) Lybrand; 13 grandchildren; 26 great grandchildren; and 7 great-great grandchildren.
Graveside services will be 2:00 PM Friday at Graceland Cemetery with Bro. Rusty Womble officiating. There will be a visitation and reception following the service at the White Hall Community Center for the friends and family.
Her grandsons will be pallbearers.
The family will be gathering at 804 McDaniel, White Hall, AR.