To share your memory on the wall of Martha Spakes, sign in using one of the following options:

She was born in Rison, AR on November 19, 1921, a daughter of James William McClain and Ollie Mae Beatty McClain of Rison. She was a graduate of Woodlawn High School... Read More
Martha Mae Spakes, 98, of Memphis, TN passed away on September 3, 2020.

She was born in Rison, AR on November 19, 1921, a daughter of James William McClain and Ollie Mae Beatty McClain of Rison. She was a graduate of Woodlawn High School in Rison.

Mrs. Spakes lived in Rison and Pine Bluff, AR until she and her family moved to Memphis in 1960. She was a homemaker and an amazing cook known for her Chocolate Meringue Pie and delicious cornbread dressing. She was a member of Audubon Park Baptist Church in Memphis for over 50 years.

Mrs. Spakes was preceded in death by her husband, Wayne Spakes; and her daughter, Betty Spakes both of Memphis, TN. She was also preceded by three sisters, Billie McClain, Doris Coker, and Dod Smith, and two brothers Bud McClain and Sonny McClain, all of Arkansas.

The family would like to thank the nurses in the assisted living division and the staff at Brookdale Dogwood Creek, Germantown, as well as the nurses at Compassus Hospice Care, Memphis, for the care provided to Ms. Spakes.

To send flowers to the family or plant a tree in memory of Martha Spakes, please visit our Heartfelt Sympathies Store.

Receive notifications about information and event scheduling for Martha

We encourage you to share your most beloved memories of Martha here, so that the family and other loved ones can always see it. You can upload cherished photographs, or share your favorite stories, and can even comment on those shared by others. 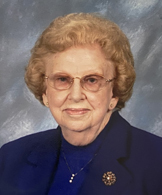