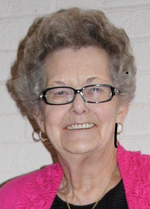 Born July 4, 1934 at Sheridan, she was a daughter of the late Vernon Hope and Beulah Wallis Hope. She graduated from Sheridan High School in 1952.

Marilyn worked at the Pine Bluff Arsenal for 20 years, retiring as a clerk in the engineering department.

She was of the Baptist faith.

Her husband, Jimmy Carroll Haywood predeceased her on July 1, 2007. They were married on January 18, 1954 at Sheridan.

There will be a private family service at Philadelphia Cemetery at Prattsville. Arrangements are by Fuller Hale-South Funeral Services.