To share your memory on the wall of Margery Rittenhouse, sign in using one of the following options:

To send flowers to the family or plant a tree in memory of Margery Louise Rittenhouse (Watters), please visit our Heartfelt Sympathies Store.

We encourage you to share your most beloved memories of Margery here, so that the family and other loved ones can always see it. You can upload cherished photographs, or share your favorite stories, and can even comment on those shared by others.

Guaranteed hand delivery by a local florist
B

Posted Nov 11, 2019 at 11:21pm
I’m so heartbroken to hear that Mrs. Rittenhouse has passed. She was such an amazing lady. She taught me how to sew Barbie clothes, & a couple of summers I spent hanging out at the house & going fishing with them. She even made my beautiful wedding dress from my first marriage. She never knew a person she wouldn’t help. She was just an incredible lady all the way around . I hate that I live so far away now. Tom, Gary, Tracy, Tim, & the rest of the family my thoughts & prayers are with you as you mourn this difficult loss. Love to all of you.
Comment Share
Share via: 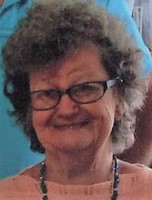