To share your memory on the wall of Jeanne Simmons, sign in using one of the following options:

Born May 21, 1921, in Elmira, New York, Jeanne was the only child of Dr. Donald Joseph Tillou and Ada Woodard Tillou. She graduated from Elmira High School in 1939 and received a Bachelor of Arts degree in Sociology from Elmira College in 1945.

She served as office manager for Dr. Simmons medical practice for a number of years. She was affectionately called “Nana” and “Gaga” by her grandchildren and great grandchildren. She enjoyed her Bridge Club and participating in outdoor activities such as water skiing, camping, fishing and family reunions.

Due to Covid guidelines private family only funeral services will be held on January 9 at 2 p.m. at Grace Episcopal Church in Pine Bluff.

To send flowers to the family or plant a tree in memory of Jeanne Tillou Simmons, please visit our Heartfelt Sympathies Store.

Receive notifications about information and event scheduling for Jeanne

We encourage you to share your most beloved memories of Jeanne here, so that the family and other loved ones can always see it. You can upload cherished photographs, or share your favorite stories, and can even comment on those shared by others.

Posted Dec 26, 2020 at 07:52pm
Jeanne I was so sorry to read about your mother. I thought so much of her she was a very sweet and kind lady. Butch
Comment Share
Share via:
LD

Posted Dec 20, 2020 at 03:44am
I was so sorry to see this. When she taught me dance, I loved her...So many good memories! Prayer for His Peace and Grace for her family and friends.
Comment Share
Share via:
TB

Posted Dec 19, 2020 at 01:57pm
Oh, the memories I have of Jeanne!! We did opera seasons in Memphis, shopping in Little Rock, DAR State Conferences, and monthly lunch bunch. And I thought Mom and her friends would be so boring!! They wore me out!! RIP Jeanne!! I will miss you!! Teri Bethge
Comment Share
Share via:
JS

Thanks for your kind words Teri , mother is at peace now 🌞
PR

Posted Dec 19, 2020 at 11:59am
Simmons Family...Thoughts and prayers for you at this time. Mrs. Simmons' quiet and gentle disposition always made me feel good whether at her home while I was growing up or at church in later years. Pam Stone Ratliff

Thanks for your kind words Pam , God bless 🌞 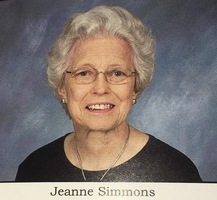 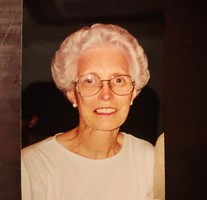