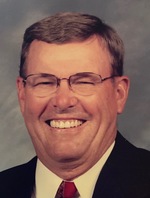 Edgar C. (Ed) Thomasson, Jr., 84, of White Hall, died Saturday, October 3, 2020, at his home. He was born July 12, 1936, in Herbine, AR, to Edgar and Myrtle Thomasson. He was retired from Southern Pacific/Union Pacific Railroad as plant manager, after 42 years of service. He was a previous member of the White Hall City Council; was a member of Olive Branch Baptist Church; and had served in the Army National Guard. He enjoyed sports and coached Little League Baseball for several years, having coached his sons and grandson. He enjoyed playing golf, fishing, and deer hunting, and was a member of the Morrison Hunting Club.

He was preceded in death by his parents; four brothers, three sisters; a granddaughter, Lindsey Bracken; and a great-grandson, Gabriel Bracken.

He is survived by his wife of 60 years, Barbara Thomasson; two sons and daughters-in-law, Mark and Denise Thomasson of Orlando, FL, and Lance and Rebecca Thomasson of El Dorado, AR; his grandchildren, Hunter and Anna Thomasson, Courtney and Andrew Schaeffer, and Kelsey Thomasson; two great-grandchildren, Eli and Grayson Bracken; two sisters, Mamie Crain and Betty James; as well as a number of nieces and nephews whom he loved very much.

Graveside services will be held at 2:00 P.M. Wednesday, October 7, 2020, at Prosperity Cemetery, Pansy, AR, with the Rev. John Mooney officiating. Burial will be under the direction of Fuller Hale-South Funeral Services.

The family will greet friends following the graveside service.

Memorial contributions may be made to Olive Branch Baptist Church, or the Alzheimer’s Foundation.