To share your memory on the wall of Edgar Thomasson, sign in using one of the following options:

Edgar C. (Ed) Thomasson, Jr., 84, of White Hall, died Saturday, October 3, 2020, at his home. He was born July 12, 1936, in Herbine, AR, to Edgar and Myrtle Thomasson. He was retired from Southern Pacific/Union Pacific Railroad as plant manager, after 42 years of service. He was a previous member of the White Hall City Council; was a member of Olive Branch Baptist Church; and had served in the Army National Guard. He enjoyed sports and coached Little League Baseball for several years, having coached his sons and grandson. He enjoyed playing golf, fishing, and deer hunting, and was a member of the Morrison Hunting Club.

He was preceded in death by his parents; four brothers, three sisters; a granddaughter, Lindsey Bracken; and a great-grandson, Gabriel Bracken.

He is survived by his wife of 60 years, Barbara Thomasson; two sons and daughters-in-law, Mark and Denise Thomasson of Orlando, FL, and Lance and Rebecca Thomasson of El Dorado, AR; his grandchildren, Hunter and Anna Thomasson, Courtney and Andrew Schaeffer, and Kelsey Thomasson; two great-grandchildren, Eli and Grayson Bracken; two sisters, Mamie Crain and Betty James; as well as a number of nieces and nephews whom he loved very much.

Graveside services will be held at 2:00 P.M. Wednesday, October 7, 2020, at Prosperity Cemetery, Pansy, AR, with the Rev. John Mooney officiating. Burial will be under the direction of Fuller Hale-South Funeral Services.

The family will greet friends following the graveside service.

Memorial contributions may be made to Olive Branch Baptist Church, or the Alzheimer’s Foundation.
Read Less

To send flowers to the family or plant a tree in memory of Edgar Thomasson Jr., please visit our Heartfelt Sympathies Store.

Receive notifications about information and event scheduling for Edgar

We encourage you to share your most beloved memories of Edgar here, so that the family and other loved ones can always see it. You can upload cherished photographs, or share your favorite stories, and can even comment on those shared by others.

Posted Oct 14, 2020 at 08:23pm
Hunter, I am so sorry for the loss of your grandfather. I know you said he was your hunting buddy, and this tree made me think of being out in woods.

Posted Oct 06, 2020 at 09:42pm
Please accept our most heartfelt sympathies for your loss... Our thoughts and prayers are with you and your family during this difficult time.

Posted Oct 06, 2020 at 09:05am
We worked with Ed for many years on the Cotton Belt. Ed was a great guy and will be missed by all that knew him.
Comment Share
Share via:
KT

Posted Oct 05, 2020 at 08:33pm
Sad to hear of Ed’s passing. I worked with Ed for many years at Southern Pacific/Union Pacific. I have fond memories both at work and of our many deer hunting trips in Texas.
Comment Share
Share via:
HS

Posted Oct 05, 2020 at 08:52am
With heartfelt condolences, from the Quality Management Department at Siemens Energy, Inc.

Flowers were purchased for the family of Edgar Thomasson. Send Flowers 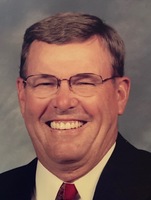