To share your memory on the wall of Eddie Sanders, sign in using one of the following options:

He lived in Pine Bluff, Arkansas from October 2013 to the time of his passing. Before that, he lived in Pinson, Alabama. He graduated from Talladega High School and was a diehard Alabama football fan. Roll Tide!

Ray was very talented with both his hands and his mind. He could fix anything from plumbing to electrical work to computer repair and most recently, gunsmithing. Eddie Ray's dream was to build a successful family run gunsmithing business with his wife.

A very proud veteran of the United States Navy, having served in the Vietnam War, Ray's love for his fellow veteran was never-ending. He expressed his devotion and care for all military personnel through his volunteer work with the non-profit organization, 3 Hots and a Cot, a charity that is all about helping, housing, feeding and meeting the needs of veterans.

Eddie Ray Sanders, you will forever be remembered, loved and cherished. May you rest in peace.

To send flowers to the family or plant a tree in memory of Eddie Ray Sanders, please visit our Heartfelt Sympathies Store.

Receive notifications about information and event scheduling for Eddie

We encourage you to share your most beloved memories of Eddie here, so that the family and other loved ones can always see it. You can upload cherished photographs, or share your favorite stories, and can even comment on those shared by others. 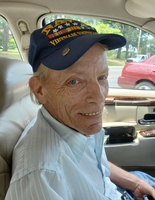