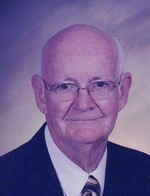 Donald Ray Barr, 90, of Pine Bluff, Arkansas went to be with the Lord on December 9, 2019.
He was born December 20, 1928, in Evansville, Indiana, to J. R. and Lessie Crabtree Barr.
He was reared and received his education in Kentucky.
He was a member of First Baptist Church in Pine Bluff where he served on several committees and worked as a Door Greeter.
He retired in 1991 after 39 years from Georgia Pacific, as a Sales Representative in the Bag Division.
He is preceded in death by his wife, Grace Coleman Barr, whom he married on September 1, 1948, in Marion, Kentucky; his parents and a sister, Emma Grimes.
Survivors include his sons, Phillip R. Barr (Darla) and Tony S. Barr (Barbara) both of White Hall; four grandchildren, Allison Brown, Matt Barr, Justin Barr, and Zach Barr, and four great-grandchildren.
The family wishes to thank all the Caregivers for the love they showed Mr. Barr.
Visitation will be Wednesday, December 11, 2019, 5 to 7 p.m. at Ralph Robinson & Son in Pine Bluff.
Funeral services will be Saturday, December 14, 2019, at 11 a.m. at Gilbert Funeral Home in Marion, Kentucky with Reverend Adam Jacobsen officiating.
Burial will be in Mapleview Cemetery.
Memorials may be made to First Baptist Church, 6501 South Hazel, Pine Bluff, Arkansas 71603 or to the Alzheimer’s Association, Central AR, 201 Markham Center Dr, Little Rock, AR 72205-1409.