To share your memory on the wall of Charlotte Munson, sign in using one of the following options:

Born November 29, 1941 at San Rafael in Marin County, CA, she was a daughter of the late George Luther Cummins and Mary Fitzwater Cummins. She was a graduate of... Read More
Charlotte Ann Cummins Munson, age 79, passed away Friday, December 18, 2020.

Born November 29, 1941 at San Rafael in Marin County, CA, she was a daughter of the late George Luther Cummins and Mary Fitzwater Cummins. She was a graduate of Novato High School in Novato, CA.

She moved from Milpitas, CA to Pine Bluff in 1981, and retired from Simmons First National Bank in 2014.

Mrs. Munson was a member of Pine Bluff First Assembly of God Church.

Her husband, Theodore Charles Munson preceded her in death in November of 1981. She was also predeceased by two sons, Timothy Charles Munson and David A. Munson; and a sister, Alpha Hubbard.

The family requests that memorials be made to the Pine Bluff First Assembly of God “Sonshiners”, 1002 Ridgway Road, Pine Bluff, AR 71603.
Read Less

To send flowers to the family or plant a tree in memory of Charlotte Munson, please visit our Heartfelt Sympathies Store.

Receive notifications about information and event scheduling for Charlotte

We encourage you to share your most beloved memories of Charlotte here, so that the family and other loved ones can always see it. You can upload cherished photographs, or share your favorite stories, and can even comment on those shared by others.

Posted Dec 30, 2020 at 10:02pm
Munson famil, Ms. Charlottes was an absolute angel. I was so saddened to hear of her passing. Prayers for you Cathy & family. Love, Cassie Neisius
Comment Share
Share via:
TE

Posted Dec 24, 2020 at 02:32pm
Charlotte Munson was a wonderful, valued public servant. Our intersection was in the election realm. There was no finer, more knowledgeable, loyal, and dedicated election official. If only just possible, her integrity and focus on Getting it Right surpassed those qualities. RIP, Charlotte. You made a difference; the citizens of our county and State--including and especially me, have been blessed by your presence. Taylor Eubank
Comment Share
Share via:
PR

Posted Dec 24, 2020 at 10:27am
So sorry to learn that Charlotte has passed away. Many years have passed since I worked with her; however, she was a very sweet person. Prayers to all her family. RIP Miss Charlotte
Pam Stone Ratliff
Comment Share
Share via:
D

Posted Dec 24, 2020 at 04:25am
Debbie, I’m so sorry you have lost your dear sweet Mother. My thoughts and prayers are with you and your family
Debbie Howard Martindill
Comment Share
Share via: 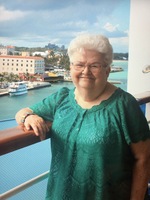