To share your memory on the wall of Annie Sebourn, sign in using one of the following options:

Print
Annie Louise Mathews Sebourn, age 91, of White Hall, went to be with the Lord on Tuesday, December 10, 2019.

Born May 28, 1928 at Redfield, she was a daughter of the late Joe Mathews and Beulah Todd Mathews. She moved to Pine Bluff in 19... Read More
Annie Louise Mathews Sebourn, age 91, of White Hall, went to be with the Lord on Tuesday, December 10, 2019.

Born May 28, 1928 at Redfield, she was a daughter of the late Joe Mathews and Beulah Todd Mathews. She moved to Pine Bluff in 1960 and had worked as a sales clerk and cashier at S. H. Kress Company for ten years.

Mrs. Sebourn was an active member of Pine Bluff First Assembly of God for 59 years. She taught Sunday school for many years and worked in the children and youth class departments.

One of her joys in past years was caring for her granddaughters and great-grandchildren.

She was predeceased in 2013 by her husband, Fred Sebourn, whom she married on February 7, 1951; and a sister, Elsie Bates.

Visitation will be Friday, December 13, 2019, beginning at 9:00 a.m. at Robinson & Fuller White Hall Chapel. The funeral service will follow at 10:00 a.m. with Pastor Mike Cottrell and Pastor
Pat Hart officiating. Burial will be in Orion Cemetery in Grant County.

To send flowers to the family or plant a tree in memory of Annie Mathews Sebourn, please visit our Heartfelt Sympathies Store.

Receive notifications about information and event scheduling for Annie

We encourage you to share your most beloved memories of Annie here, so that the family and other loved ones can always see it. You can upload cherished photographs, or share your favorite stories, and can even comment on those shared by others.

Roger and Diane Gray sent flowers to the family of Annie Mathews Sebourn.
Show you care by sending flowers

Posted Dec 18, 2019 at 12:28pm
She was loved. One of my favorite people. Always loved visiting in her home and visiting sat church growing up. Always positive and uplifting. Had my first cherry cheese cake in her home. Always remember her when saying "What a goose I am" to people. Learned it and had fun at her house with that game. Prayers for family
Comment Share
Share via:
VT

Posted Dec 12, 2019 at 08:02pm
Randy and family,
Prayers for you. May Jesus comfort you during this time . Sis. Annie was such a sweet lady.
WyvonneWages& Lynn, Vonda, Kelli & Lauren Taylor
Comment Share
Share via:
AL

Posted Dec 12, 2019 at 08:22am
Mrs. Annie was the kindest woman I ever met. I know she loved you all dearly. We wish you peace and comfort during this time.

Posted Dec 11, 2019 at 10:08pm
She was a precious lady and has certainly left a beautiful legacy of a life well-loved in service to her Lord and Saviour Jesus Christ. We love you guys and are lifting you and your entire family up in prayer.
Tonya Wood & Chase Barrett
Comment Share
Share via: 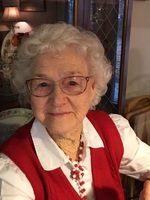